During lockdown, racing was curtailed for many, the MTB’er in question was champing at the bit to show his form but alas no stage to show it on. After a bit of to and fro with the Coach, both parties decided to target a shot at breaking the British Everesting record. Let’s take a look at what it takes to target such an event. First things to consider were

We will look at each of these areas below.

We spent quite a bit of time trying to figure out where would be the best location for the record attempt? Things to consider were, gradient, ease of support on the climb, safety at the turn points and a safe descent. In the end the athlete in question came up with a cracker of a location – Crowcombe Hill 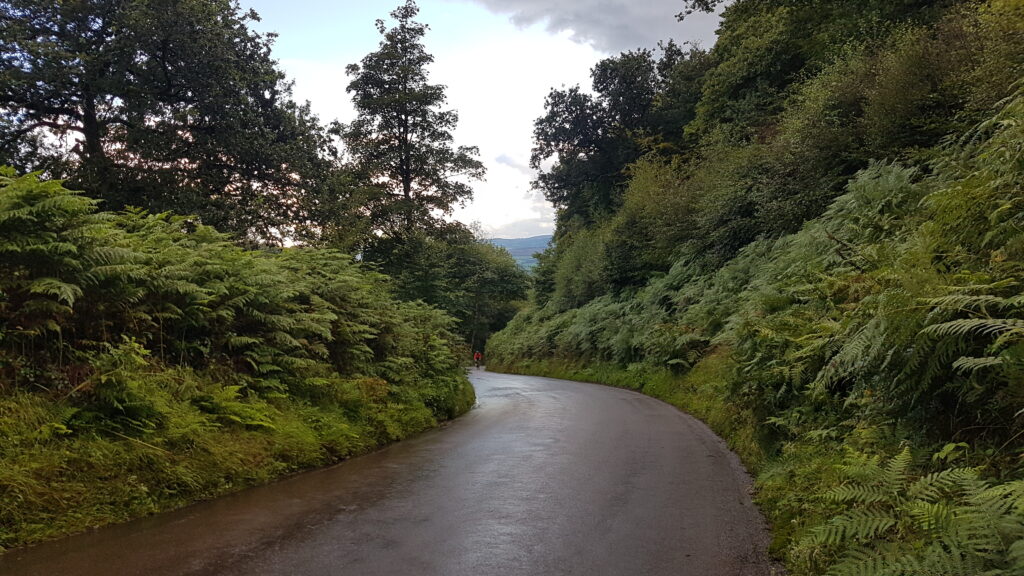 Narrow but it isn’t a single track

Will it be possible to get gearing low enough ?

We planned a good training ride to practise pacing and try different pacing strategies to see how that affected the time outcomes.

We practised several laps at different intensities to get a good idea on averages.

We tried 290 watts, 310 watts and 330 watts. What we found out was that an increase in 20 watts worked out to approximately 20 min gain overall if done for the full 58 laps, although weather conditions would have an effect on the day.

After the recce we were confident that a 290-300 watt ascent power would net us a good time and break the record.

The athlete in question is Phil Stonelake, mid 40s, office worker, father of 2 and Husband to Nina who would also be there to support on the big day. Phil’s back story, he used to ride MTB as a youngster then had time out of the sport in his adulthood, then took up running and got back into riding in his 40s. His passion now is Hill Climbing (3 times age group national Champion 2019/20/21) and MTB’ing, SW regional Champion 2021. 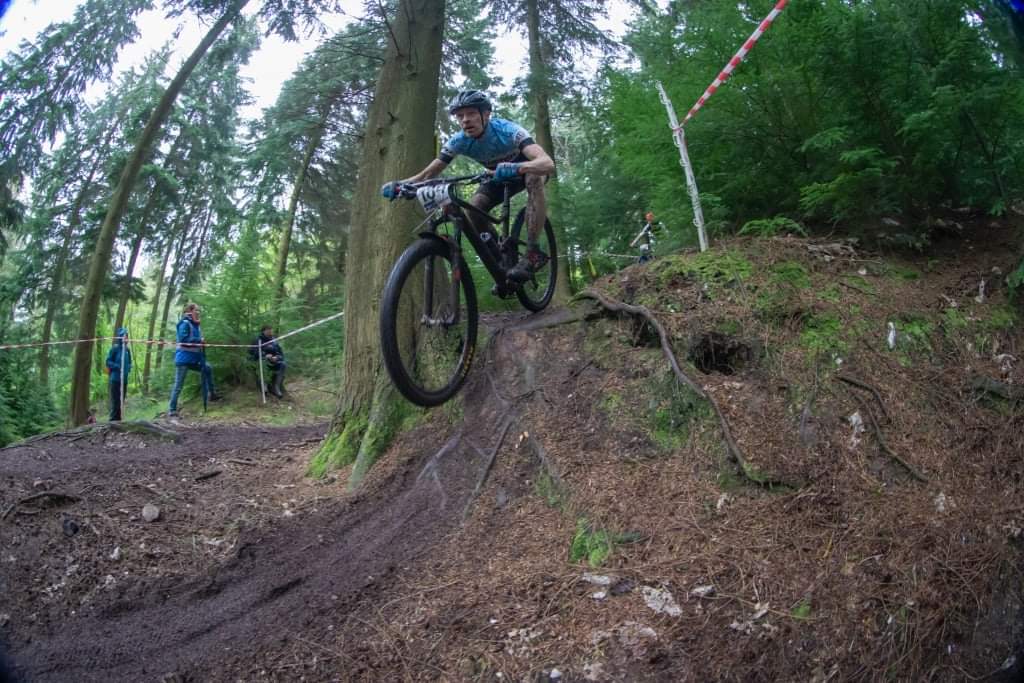 Phil’s strength lay in his high FTP 370 watts (5.4 wpk) and his fatigue resistance which was one reason why we thought this attempt would suit him quite well.

This was going to be one of the vital equations we would have to crack to break the record. Doing or planning an event like this and the nutrition requirements was something neither of us had attempted before. So we did a fair bit of planning with regards to it, i.e. Kj burn rate per hour, likely carbohydrate burn rate. This gave us a ballpark for what to try and consume calorie wise on the day. We practised fuelling quite a bit on training rides during both easier and hard sessions to see if the 90 g/hr of carbs was tolerable for a long duration and at the intensity that was required. If attempting this record attempt again then the fuelling requirement would have to be increased. On the day, Phil brought such a selection of food with him I thought we were going on a picnic that was to feed the masses. Sweet and savoury foods as well as the normal carbohydrate sports drinks and gels.

As it was a record attempt, we had the benefit of deciding when we would be able to do it. So looking ahead at weather forecasts during our taper period was key in finding an ideal day for a cool temperature but a consistent South Westerly Tailwind. We decided we wanted to go for the attempt during the working week as there was less chance of holiday traffic and also other cyclists on the route. However the day we did do the attempt, we didn’t take into account that a local group would be using the area and decide to park a load of their vehicles at the bottom turn point at mid way through the attempt. This was quite a stressful time on my part as I was trying to sort out feeds for Phil and also try and make sure the turn point was clear from the groups parked vehicles. I don’t think they realised how quick someone can descend and slam into a turn and if someone steps out in front of them then there is no escape route. Luckily they were very obliging and were in aghast at someone actually going up the hill more than once, let alone 58 times.

After the recce ride we knew we had to make some adjustments to the bike. Mainly the gearing as the climbing speed was between 5 and 10 kmph depending on where on the climb you were. So Phil managed to get a super small 30 tooth chainring, the only issue was that it wouldn’t fit onto his road cranks so I had to do a bit of engineering bodge and manufacture some aluminium offset washers to make it all fit and work properly. Luckily this worked out really well. We also stripped the rear cassette to just 4 gears (largest being a 36) and Phil had some beautiful new Hill Climbing Tubeless wheels built up by Ryan Builds wheels. In all the bike was stripped down yet we were confident of its durability from all the braking etc that would be involved. The wheels are for sale if you’d like to buy a set of exquisite pieces of history. PM for details.

Clothing wise, Phil wanted to ride with his normal bib shorts and a bright ss jersey to help aid as a visual for traffic which was good for safety. 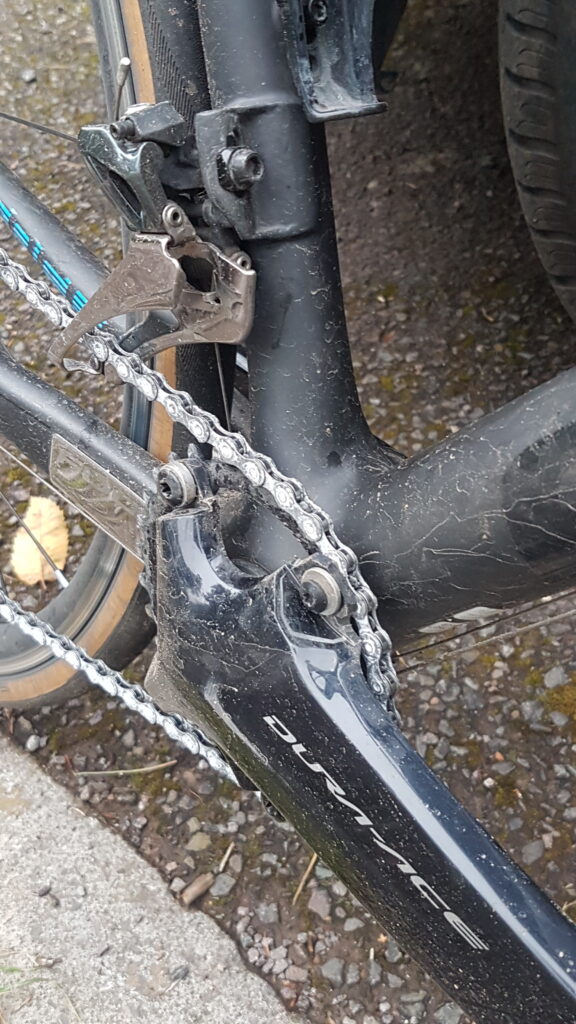 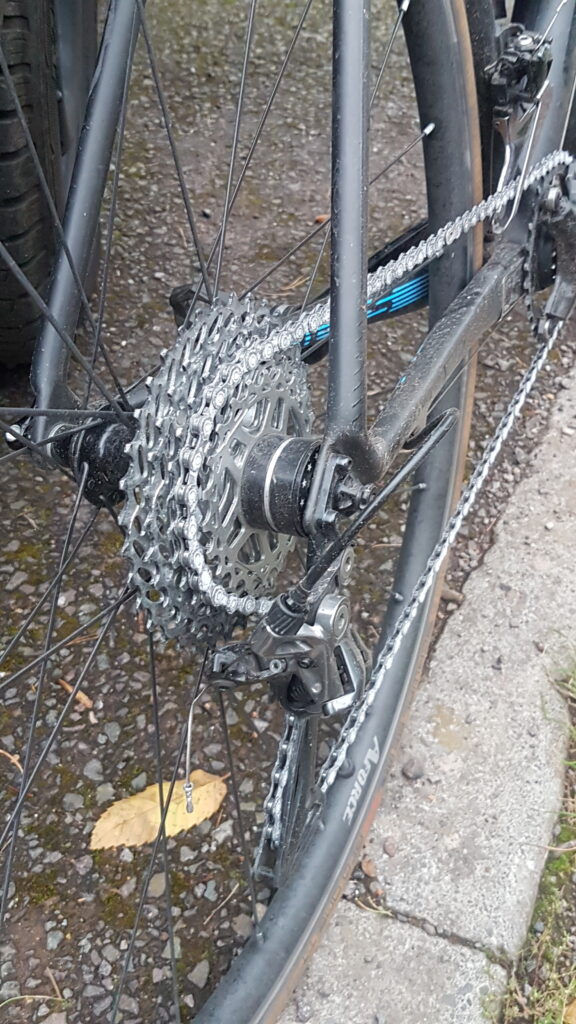 In the 8 weeks prior to the attempt we increased the weekly hrs so Phil was consistently doing 15 and building up to 18hrs.

We also did a lot of work in the so-called NO Go Zone i.e Tempo and Threshold work and some higher powered VO2 work just for maintenance. We also did some specific cadence work to help with the adaptations we were looking for. We really wanted to work on Phils ability to do a high workload for a long period of time. I felt that giving Phil more top end VO2 and less tempo would have given him a higher FTP but he wouldn’t be able to sustain that effort for the duration that was needed, so he may have cruised the first 3 or 4 hrs then the fatigue would bite and the power would drop. In essence I wanted to pace this like a long time trial and definitely not blow up.

Finally we had done all the training, tapered, looked at the forecast and picked our day.

We set up camp on the climb with the van and all the food at the U turn layby at the bottom, a picnic table and chair for me to hand all foods/drinks and keep track of lap times. I also set up a large umbrella upside down so Phil could toss his empty bottles into it before he grabbed a fresh bottle from me(I found this way easier than trying to find an empty bottle in long grass). We spray marked the roads where we wanted to do the turns each lap so we didn’t have to do any extra climbing but also know we did the required amount for each recorded climb.

A quick check of the bike and we were ready.

Now came the unexpected bit, ah the great British weather. Lo and behold it started to rain, it wasn’t forecast when we went ahead and planned the attempt date. It actually started to rain on the 38th lap, we can see this easily in Phils Training Peaks ride data, his speeds on the descents drop drastically which also increased his descending time.. Looking at the data afterwards, what surprised us both was that his ascent speed also drops quite a bit even though Phil was actually pushing out more power(circa 10-15W) to compensate for his loss on the descents. The rain lasted approx 60-90 mins, although not a downpour it was enough to affect things. Later it eased off and started to dry again.

We did 3 laps extra just to be sure. 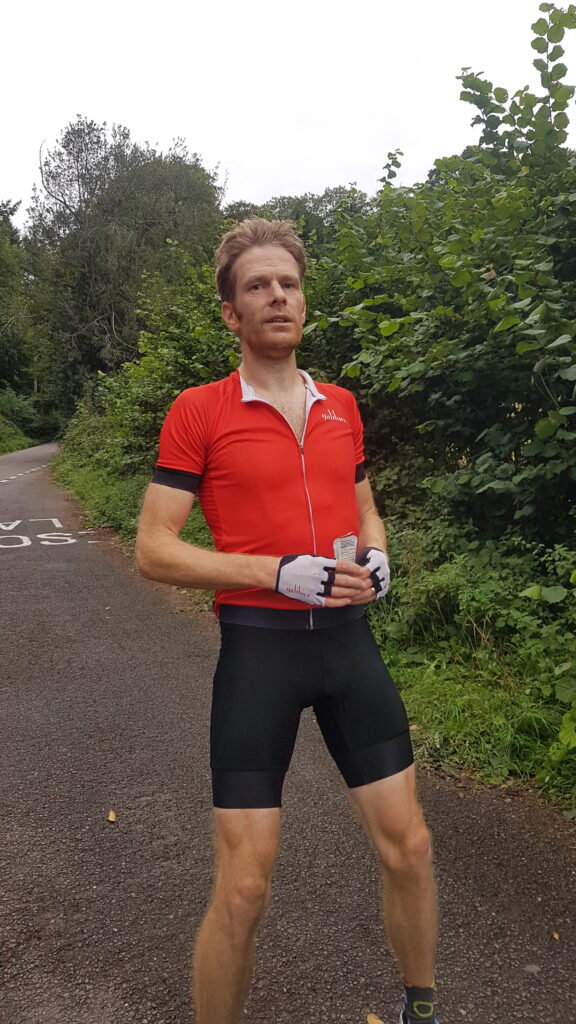 So in all, Phil did the Everesting time in 7 hrs and 44 mins, smashing the previous record by over 20 mins. His post ride comment was he knew he had done a ride that day and needed some rest.

What I found out supporting Phil on the day was that although the external weather factor had altered things and brought a dampener to the occasion, positive feedback regarding time up on record kept Phil really motivated even though he knew he was losing time compared to his previous pace. If it wasn’t for the weather we predicted he would have been approximately 10 mins faster.

I have to give a big shout out to Phils partner Nina, who helped me at the support station and also went up the climb to support Phil nearer the top of the climb. We also had some local friends that rode out to support Phil, so a friendly face was always welcome. 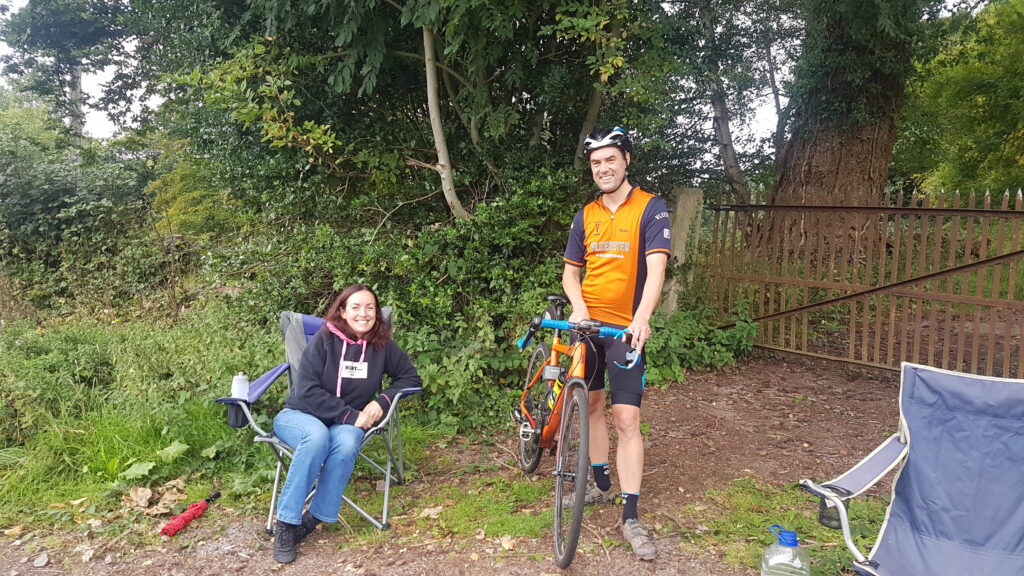 In all we were both very very happy with the ride, pacing, nutrition etc

How to break the new record

If we were to do this again and aim for the new British record held by Phil’s team mate Archie Cross  (7hrs 23 mins) then we’d need to do it on a great tailwind day, and target 310 watt ascents and really work on reducing the descending time. Archie did an awesome effort on his attempt hitting circa 4.5 wpk ascents and was nailing the descents going circa 10 secs faster than Phil on his attempt.

If however targeting the World record held by Ronan MC Laughlin (6hrs 40 mins) then ascent power would need to be in the region of 5.1-5.3 wpk which would need an FTP in the region of nearly 6 wpk. Not impossible but a big big task by a special rider. They’d really need high fatigue resistance, they’d also need to really look at carbohydrate consumption and push the boundary of 120g/hr as they’d be burning in the region of 180-250g/hr of carbohydrates (dependant on athlete)

Hope you enjoyed reading about our Hairy legged MTB’er Phil and his exploits. If you have some thoughts on areas we didn’t look at or can improve etc please leave a comment, we’d be very interested in hearing them.